To be totally honest I didn’t really know anything about Etxebarri until some friends starting raving about it.  When I then found out that they were going to go eat there, I had to join in.  For those that don’t know the concept for this restaurant is that pretty much everything is cooked on a grill.  As we found out, the chef (Victor Arguinzoniz) does all the grilling for service.  Its very refreshing to find a chef who is truly behind the stove, err… grill.  The restaurant has one Michelin star, and is #50 on the San Pellegrino Worlds 50 Best Restaurants.  The food as you will see is very simple, in the absolute best way possible.  It isn’t fussed with.  This is a chef who truly sources and practices getting the best product possible, not just talking about it.  Someone was telling me the chef went to Italy and tasted some cheese that he fell in love with.  He had to have it.  So what does he do?  He goes to the farm and gets a couple cows that makes that cheese.  He is in the pursuit of quality home made, he doesn’t mess around! 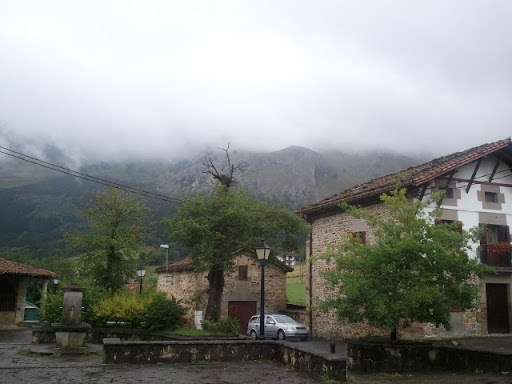 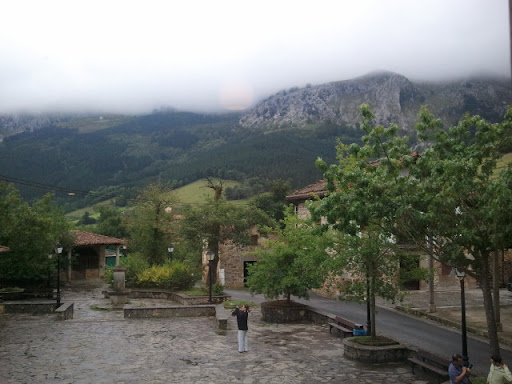 For those who are interested in ever going, keep in mind that this restaurant really is in the middle of no where.  Its in a small town by some mountains with no signs to really help you along the way.  Though the view is well worth it. 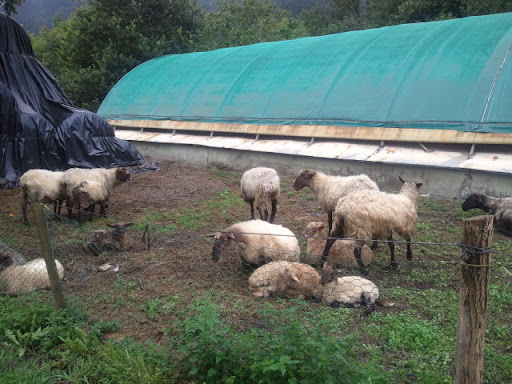 Across the street from the restaurant is a small farm which had some sheep and chickens which im sure go to the restaurant.  Cant get more local that that.

So finally for some food! We all ordered the tasting menu along with a few dishes that really caught our eye.  The a la carte items we got were the anchovies, foie Gras and chorizo.  Though I forgot to take a picture of the Chorizo, but it was really good, and looked delicious and was everything you could ever dream of, promise. 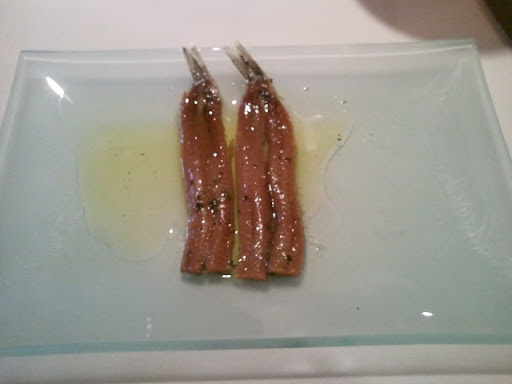 In an area known for some of the best anchovies in the world, how could we resist?  The verdict?  They were damn good.  A mellow saltiness to them with an interesting texture that was a bit dense almost seemed rubbery.  Not bad, just something I haven’t tasted before.  They were really good, but still a close second to what we recently ate at Itsas Mendi. 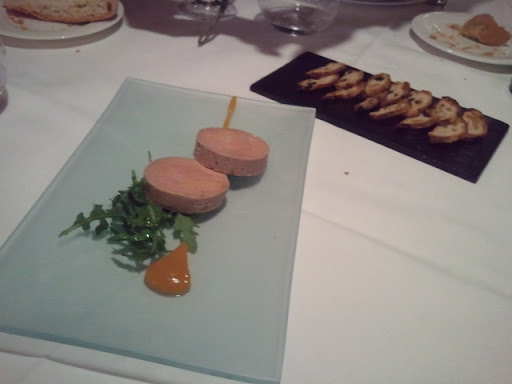 Ever since Ive arrived in Spain I have pretty much been eating Foie gras at least once a week.  Ive fallen in love, the Foie is just so good out here. This dish has really topped everything that Ive tasted so far.  It reminded me a lot of the Foie dish at wd-50, the experience of eating it was very much the same.  It only took one bite of tasting everything together before I started smiling and giggling with joy because of how good the dish was.  There was a bright tang from the sauce which seemed to be a sweet orange puree with the zest.  Then there was the arugula salad, crunchy raisin bread and the slightly smokey omg its so good foie which the make in house…yes.  This dish really set the meal for all of us.  We were absolutely stunned and we haven’t even started the tasting menu!   We got a really good taste of what was to come. 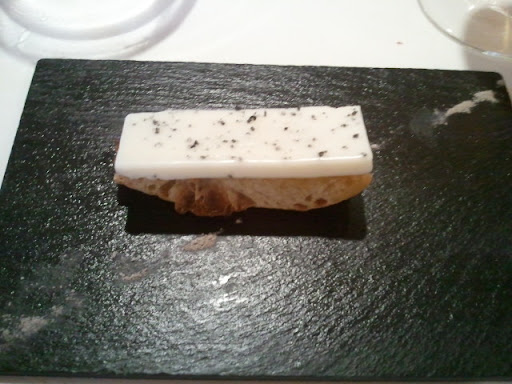 Here she comes, the first course in all her simplistically hidden beauty.  If you ask me this was the best course of the meal.  Call me bold, but im confidently saying this was the best thing ive ever eaten.  After I stopped from my second round of laughing smiling giggles we were all quite in awe of this dish, just absolutely incredible.  No  youre not crazy, youre right.  Its bread and butter.  house Smoked sheeps milk butter with ash on a very light, crunchy airy, not too hard, crumble beautifully on the first bite delicate piece of bread from the heavens basted with olive oil.  That butter with the ash was so damn simple, but made so incredibly well.  The thing that did it for me as well as one of the other diners was that it instantly got us emotionally.  After taking one bite I was taken back home in the backyard with the grill  full of red hot coals.  It was as if the smoke and ash from the grill back home was infused into that butter.  I was taking a buttery crunchy bite into the grill and it was so damn good. 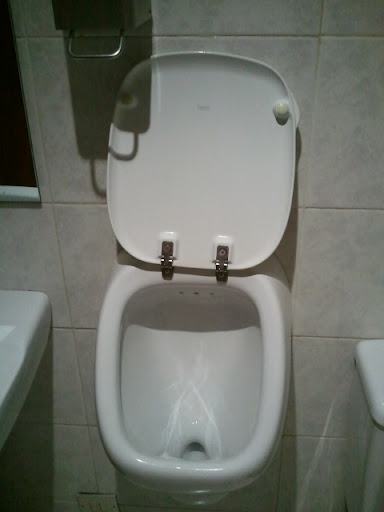 So I took a bathroom break and you get to join me in my discovery…A urinal with a lid!  Class act if you ask me. 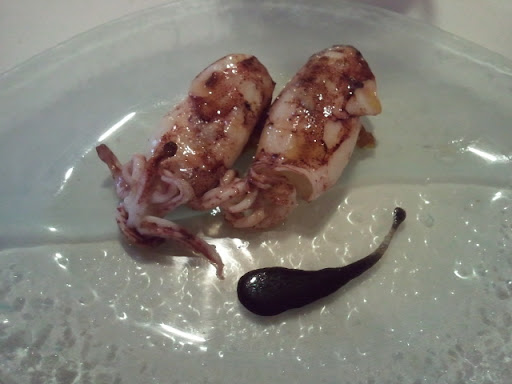 “Chipirones”  Not as earth shattering as the last two, though this dish, like much of the rest, was executed perfectly and tasted incredible.  That seems to be the big thing here.  Simple food with incredible flavor.  It went along with a squid ink sauce, and caramelized onions which were hidden below.  Squid was smokey and had some acidity from a vinaigrette it was tossed in. 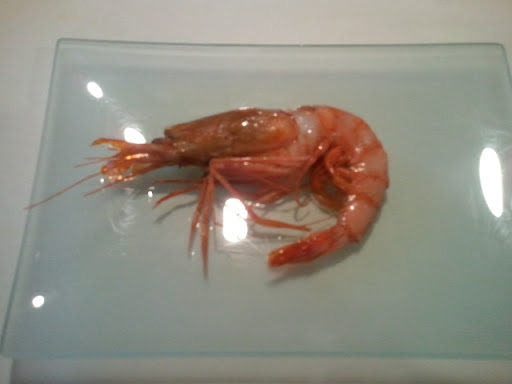 “Gamba de palomas”  Good course, cant get any simpler than a giant delicious shrimp on a plate.  Head was partially popped off and they brought out a warm moist hand towel since we were supposed to eat it with our hands. love that. 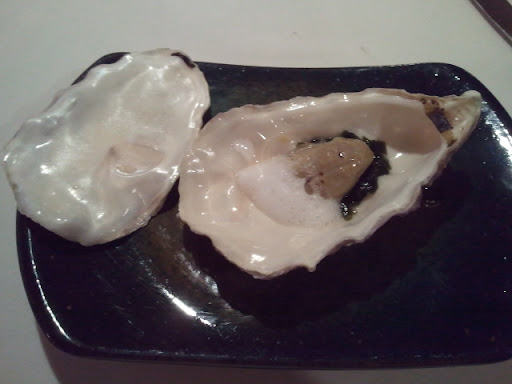 “ostra”  Great tasting oyster with a salt water foam and some type of sea weed.  This dish tasted good and made me feel that this would touch someone who lived out on the sea the way the bread and butter dish did to me.  It came out in the closed shell and you opened it to reveal an oyster with the flavors of its habitat.  An interesting note was that we found out that they don’t really use any chemicals or anything.  We didn’t catch what it was, but they told us they sourced some type of seaweed/algae/ plant or something that was naturally occurring and used that to create the foam rather than a powder. 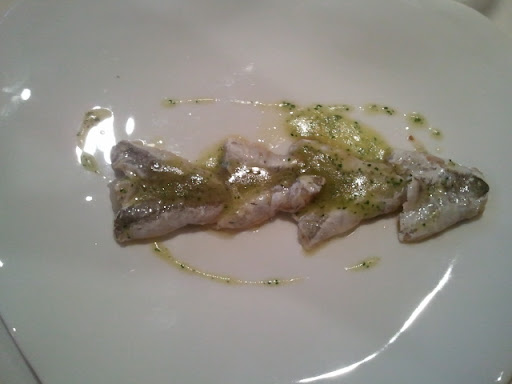 “Cocoches de merluza”  Not sure what to call it in English, but basically Cocoches are like cod jowl and are a very popular dish here.  Basically you take the cocoches cook them in oil and then use fish stock to make a sauce with that flavored oil.  Ive only had cocochas a couple times here, but these were the best so far! 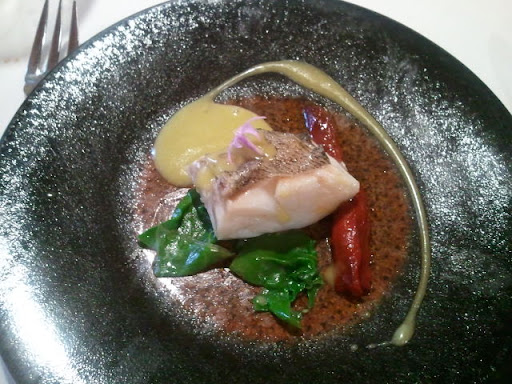 “Bacalao” means salt cod in the US but means fresh as well as salted cod out here.  Beautifully cooked fish, some type of roasted pepper, a lemon sauce and some type of greens… Goes to show how well Im learning the language here.  This seemed to be the most complex dish of the meal.If youve been paying attention, youll notice that there really hasnt been more than about three ingredients per course.  Though they all shine. 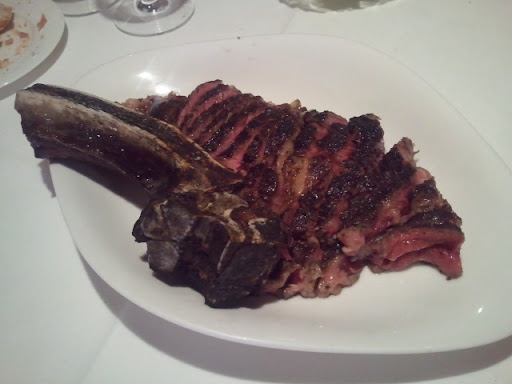 “chuleta” (chop) Big ol rib eye chop that was shared amongst the table.  Really really good meat.  I was pretty sure I was going to need more salt since it was a thick cut.  Though it was seasoned beautifully, something that has been right on target though out the meal.  This came along wit a light salad and was a great way to start getting into desserts. 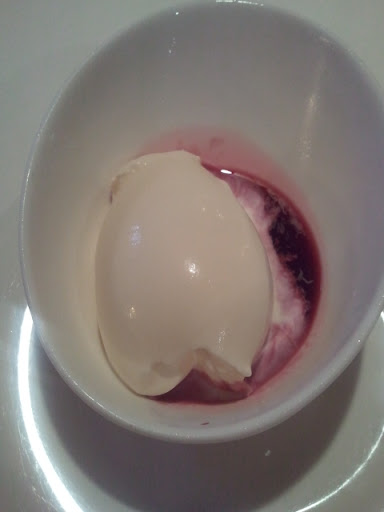 “Helado de leche reducida” (Reduced milk ice cream)  So this dessert had us all in love as well as boggled.  There was some type of a berry sauce which was very nice, though what we all loved was the ice cream.  It had a very subtle smoke flavor which brought about some vanilla like flavors.  The texture is what we were trying to figure out.  It was very light soft and almost watery to the touch.  Though once you tasted it, it had a very rich and creamy mouth feel.  It was unlike any ice cream ive had.  We were all talking about all kinds of crazy ways of how they got the texture and flavor and how genius it is.  After talking to the cooks we found out how they did it…with milk.  Thats it.  No eggs, no stabilizers, no cream nada.  Just reduced milk and our good friend Paco Jet.  Excellence through simplicity, unreal. 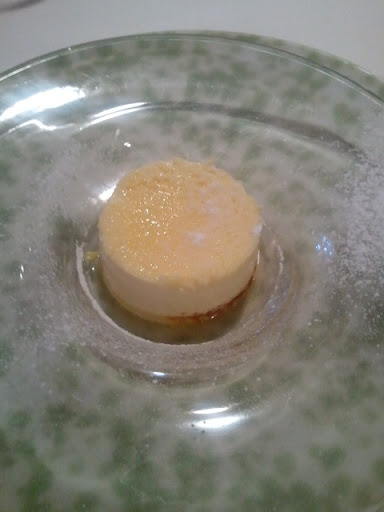 “flan de queso”  So think of a flan, and how tasty it is.  Triple that and youre getting close to this dessert.  It came out with the ring mold still on because of how fragile it is.  This is basically like a cheesecake flan with the texture just firmer than room temp. butter.  It was a little bit rich for me but thats just because I usually like to end a meal on something like a sorbet.  Though this was a great substitute.  The smokiness was there and complimented great with the sweetness. 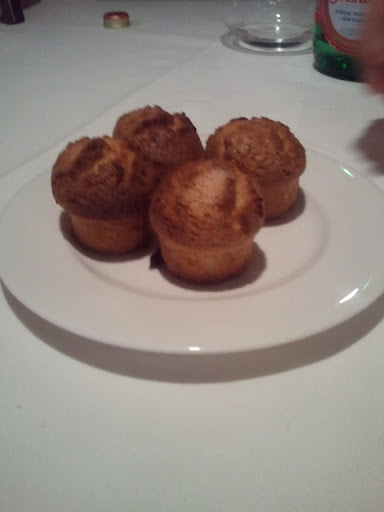 Some type of little sweet soft egg white mini muffin. Clean. good, yummy.  It was finally the conclusion of our 4 hour meal.  I was exhausted with joy at the end of it.  I just wanted to take a nap starring into the mountains.  Though alas, it was time to check out the kitchen. 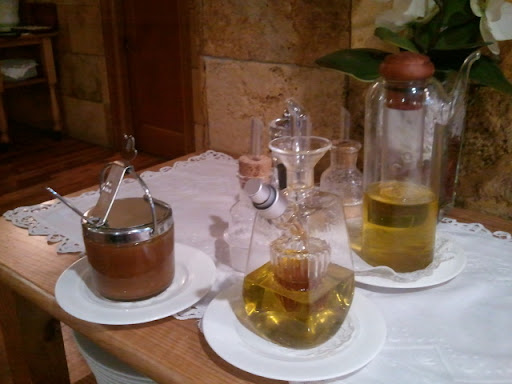 Toys for finishing.  xvo/vinegar sprayer combo is my favorite. 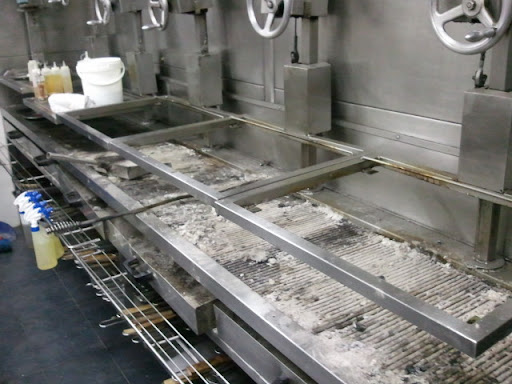 The famous grill that does it all.  Different racks which are also adjustable by height.  If you look under the grill youll see the handles to all their custom made grill pans. 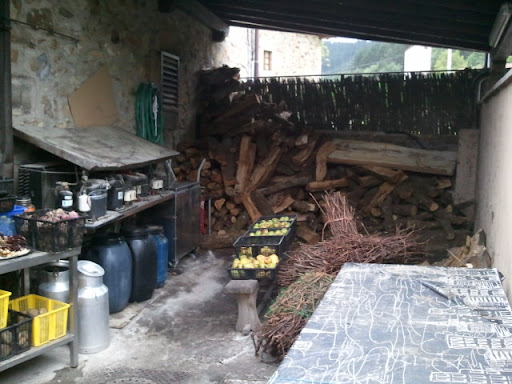 To get to the kitchen we had to walk outside and around the back to see the great smelling woods. 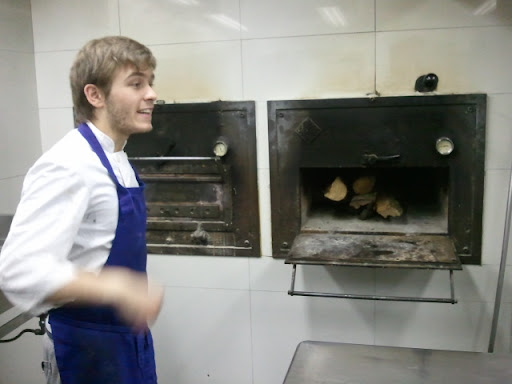 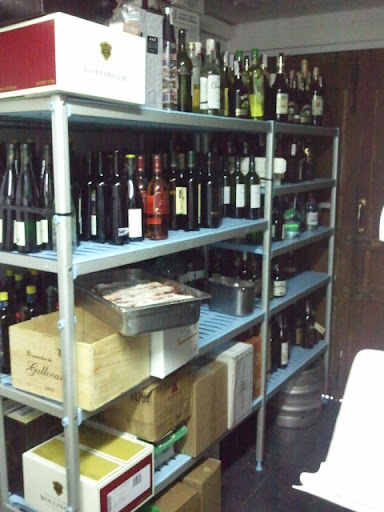 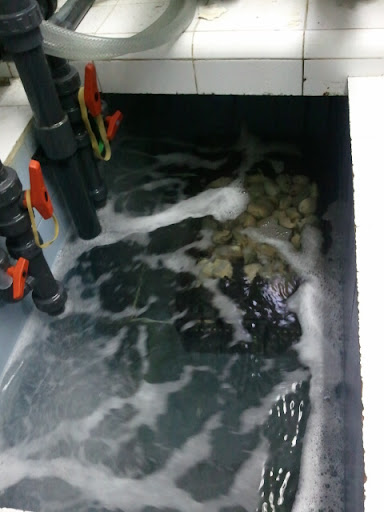 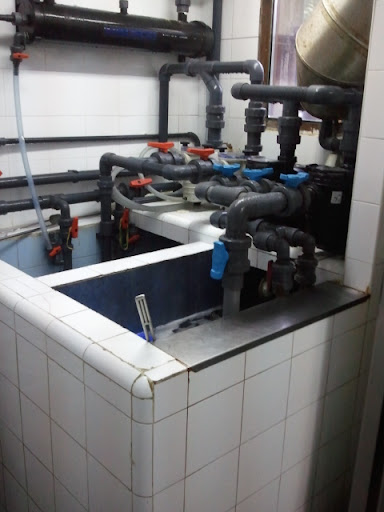 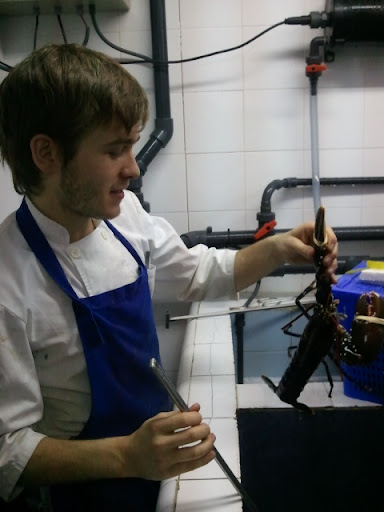 So im about to blow your mind.  They have this giant double fish tank which they use to keep all of their seafood alive and fresh.  Lobsters, clams, eels, you name it, they’re becoming friends in the pool. 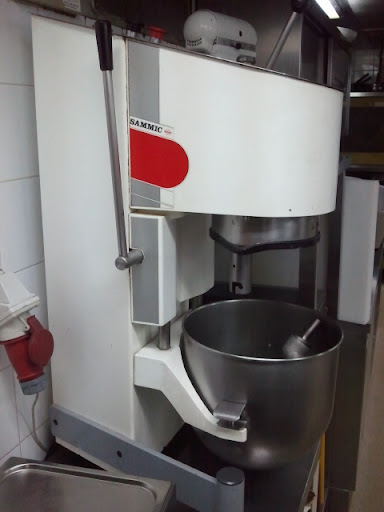 I spy with my little eye a restaurant using a giant sammic mixer!  It is now no surprise why their bread is so good.

My friend Ashley always stressed to me the idea of wanting her good to be simple.  Just making a really really good chocolate truffle, or a really really good macaroon.  Basic things, done perfectly.  I thought she was a bit crazy, coming from the mentality of avant garde being the best garde.  Though with this meal and her ideas finally sinking in, I think I may be changing how O and many other think about food in the coming years.

So finally for some food!